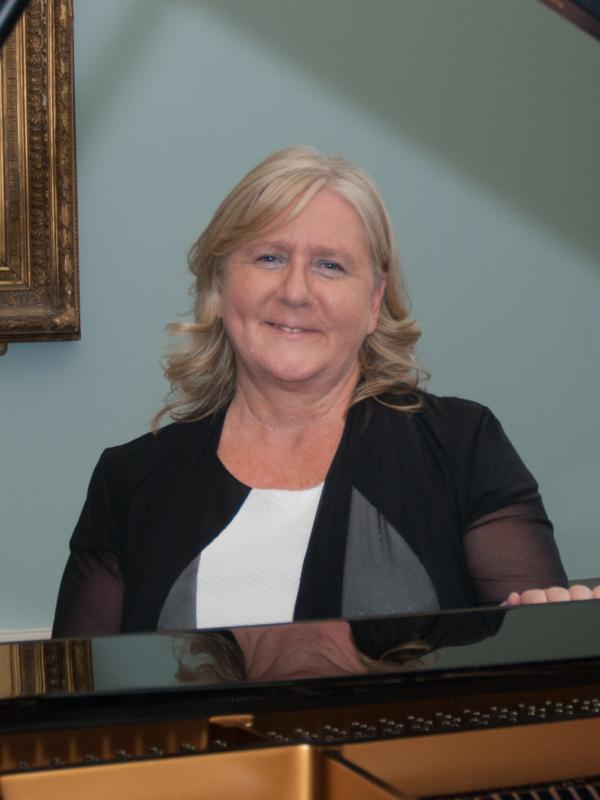 Colma Brioscú studied piano with John O’Conor and Valerie Walker at the RIAM. After graduating from University College Dublin she was awarded a French Government Scholarship to study in Paris with Theodore Paraskivesco and Annie d’Arco. During her time at the École Normale de Musique de Paris she won Second Prize in the Concours International des Femmes Artistes Musiciennes.

Since returning to Dublin in 1983 she has concentrated on her teaching career, joining the staff of the RIAM in 1986. Since 1984 her students have won both solo and duet competitions at the ESB Feis Ceoil in addition to other competitions around the country including the Arklow Festival, Sligo Feis Ceoil, RIAM, EPTA Ireland Piano Festival, Kilcoole, Newpark, Sutton and Drogheda Music Festivals. Numerous students have also been awarded scholarships from the RIAM and received permanent tsb High Achiever’s Awards from the RIAM Local Centre Examination System.

In 2017 Colma was a member of the jury for the Irish Round of the Dublin International Piano Competition and is currently on the Executive Committee of the DIPC. She has adjudicated at Festivals including Newpark, Kells, Aravon, Midleton, Arklow and ESB Feis Ceoil and has been an examiner for the Local Centre Examination System of the RIAM for over 30 years, holding the position of Senior Examiner from 1997 until 2000. She was involved with the Donegal Summer School from 1989 until 2002 and has given masterclasses throughout the country.

Colma was a regular performer at the National Concert Hall from 1986 until 2011, as well as other venues including the Hugh Lane Gallery, the National Gallery of Ireland and Dublin Castle. She has also performed as part of Musique d’Eté in Nice, France and at Summer School in Morges in Switzerland. She has broadcast on both RTÉ Radio and Television and has recorded many of the miniature works for piano on CD.

Colma is RIAM’s Head of Keyboard since 2015. She was Chair (2018-2020) and Vice-Chair (2016-2018) of the Board of Studies, the Academic Council of the RIAM. Colma chaired the Course Committee for both under- graduate and post-graduate programmes. Since her appointment as Head of Keyboard in 2015, Colma established a new programme for beginners, The Introductory Piano Programme. Colma has been involved with RIAM Young Scholars Programme, a programme for exceptionally talented students for all faculties. She also founded an Annual Fundraiser Piano Duet Marathon, Piano Duetathon, to support the Scholarship fund for RIAM students.In 2019 Colma was awarded the title of life Professor at the RIAM.