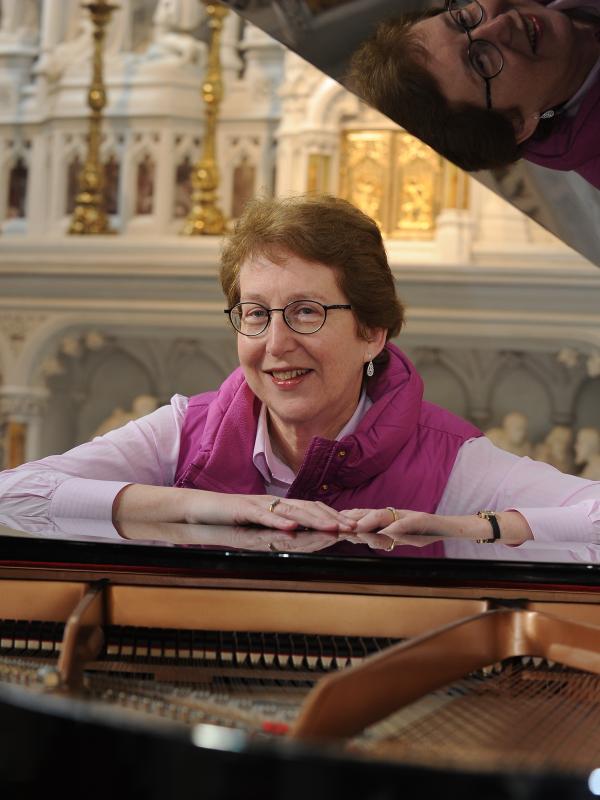 Elizabeth Keighary studied piano with Mabel Swainson during her final year in UCD, continuing after graduation until she won the Edith Best Scholarship in the Feis Ceoil, Dublin, to study in the Royal College of Music, London. While in London she developed her love of chamber music and accompaniment giving several performances in the UK and Ireland. During these years she sang with the London Philharmonic Choir, participating in several concerts and recordings with the London Philharmonic Orchestra.

Elizabeth returned to Ireland in 1982. While teaching in the Music Faculty in the IT in Waterford and later at Clongowes Wood College, Co Kildare, she continued with chamber music and accompaniment performing and also developed a love for conducting.

The Kodaly philosophy of music education is a strong influence on her musical life of performing and teaching. She participated in several Summer Courses in Dublin and Hungary. Around this time she was invited to direct Carlow Choral Society which she did for 4 years until 1993 and enjoyed very much. During her tenure, the choir developed to such an extent that the position needed more time than was available to Elizabeth along with full-time teaching.

Starting or re-developing choirs has featured prominently throughout her career. The choirs under her direction participated in and won several prizes at festivals around the country; they include Arklow, Kilcoole, Navan, New Ross, Sligo, Wesley, Feis Maitiú and Feis Ceoil Dublin. Elizabeth is also an examiner for the practical exams for the SEC (State Examinations Commission) at Leaving Cert since the mid 1990s.

In 2006 Elizabeth graduated with an MA in performance and musicology from NUI Maynooth, focussing on chamber music. More recent CPD (Continuing Professional Development) has included the further study of Dalcroze Eurhythmics, which she first encountered with the late Elizabeth Vanderspar in the Royal College of Music, London.

Elizabeth has been directing Junior Choirs at the RIAM since 2005.