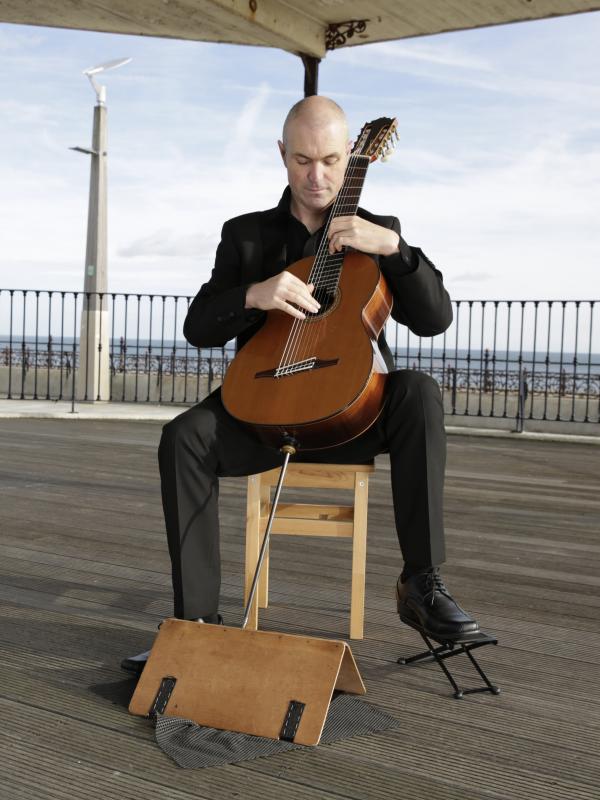 Described by the Irish Times as "Ireland's most distinctive guitarist", Redmond O'Toole was the first to adopt Paul Galbraith’s ‘Brahms guitar’. This groundbreaking instrument and technique uses an 8-string guitar in the position of a cello.  He has performed at major concert halls and events such as Passau Guitar Festival, Rhode Island Guitar Festival, Turku Guitar Society, Austin Classical Guitar and many others. At home he has held residencies at the National Opera House and the National Concert Hall and performed at festivals such as West Cork Chamber Music and Galway Arts Festival. He has performed with orchestras such as BBC Ulster and the Irish Baroque and has undertaken substantial international tours as former guitarist for legendary Irish group The Chieftains and as a founder member of the critically acclaimed Dublin Guitar Quartet. Redmond is also the artistic director of the International Guitar Series at the National Concert Hall and has performed for two Irish Presidents and was part of the televised concert for Queen Elizabeth’s historic visit to Ireland in 2011.

Recent projects include collaborations with world-renowned cellist, Raphael Wallfisch, the Vanbrugh String Quartet and violinist Chloe Hanslip . He has also performed with the LA Guitar Quartet, Derek Gripper and Paul Galbraith. He has appeared with many different and varying ensembles such as Crash Ensemble, Esposito Quartet and the UFO Orchestra among others. In 2012 Redmond set up Music Generation Wicklow: part of a national music education programme funded by U2 and the Ireland Funds. Redmond was coordinator for the initial 18 months of the programme.

Redmond’s principal teacher was Dr Oscar Ghiglia with whom he studied privately in Athens and at the Accademia Chigiana in Siena (under scholarship). Prior to that he studied at DIT Conservatory of Music and Drama in Dublin receivingn a first class honours degree and masters in performance.  During his time at DIT he won an unprecedented number of awards for guitar, most notably the RDS Music Bursary (Ireland’s largest music prize). In 2008 he was the recipient of an Irish Arts Council Bursary which supported  intensive periods of study over a three-year period with lutenist Nigel North at the Jacobs School of Music, Indiana.He is currently a DMusPerf candidate at the RIAM in his final year.

Redmond has to date recorded 3 CDs ; Movements and Baroque for German label Bornheim Klassik and October on Achill for VGO recordings (San Francisco). He has premiered numerous contemporary works by composers  by Nico Muhly, Kevin Volans, Marc Melitts and Ian Wilson among others.

Redmond has been a teacher at RIAM since 2015 and his students have enjoyed national competition successes and continued to postgraduate studies at internationally-recognised centres such as Kings College London and Basel Academy of Music. He is also responsible for setting the syllabus of the RIAM grade exams.