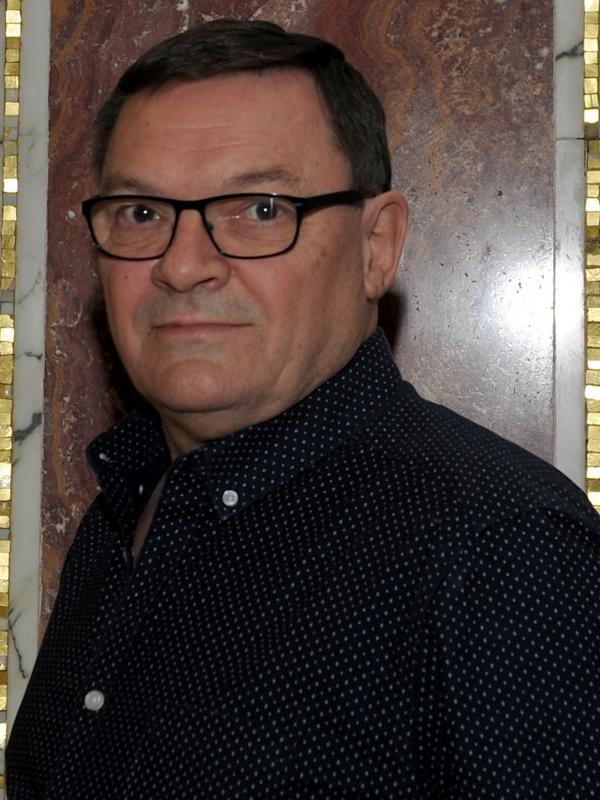 Fergus O'Carroll was born in Waterford into a musical family. He was initially trained by his father as a violin player before moving to brass at the age of 12. He started playing French Horn at the age of 15 and was immediately awarded a scholarship by the Irish Youth Orchestra to Study with Victor Malirsh at the Royal Irish Academy of Music.

Immediately on leaving school at the age of 19, Fergus was appointed to the position of 4th Horn in the RTE Symphony Orchestra where he remained for eighteen months before taking up the vacant position of 1st Horn with the RTE Light Orchestra. At the same time, he began his conducting career working with a youth band in Ringsend and it was for this group that he began to arrange music and write his own compositions.

In 1984 Fergus moved back to the RTE NSO as Section Principal French Horn, a position he held until his retirement in 2016. In 1987 he was appointed musical Director of St James's Band, the oldest community musical group in the country and remained with them until 1998 after which he moved to become musical director of the Dublin Concert Band, a group that he conducted until 2018 and who have been awarded the title of National Band Champions continually for the past 7 years. About this time Fergus became involved with the Dublin Symphony Orchestra and maintained a 17-year long relationship with them which ended recently. In 1999, he joined the teaching staff at the Royal Irish Academy of Music.

In 1992, Fergus was invited to become the founding MD of the Ulysses Chamber Choir and remained with them until 1997. This collaboration was to begin his association with a number of different choirs in the intervening years including Dublin Chamber Choir and Dun Laoire Choral Society. He is currently MD of Mullingar Choral Society, a relationship that began in the year 2000.

Throughout the years, Fergus has continually arranged and composed music for all of the groups that he works with which lead to the formation of OCMP, a small publishing company dealing mostly with arrangements of Irish music. Through this he has become a nationally recognised music typesetter working for composers such as John Kinsella, Micheál Ó Súilleabháin, Grainne Mulvey, Frank McNamarra, RIAM and many others. He has arranged for the RTE NSO, RTE CO , Donal Lunney, Irish Film Orchestras, RIAM Performing Groups among others and has been commissioned to arrange for many groups including both RTE orchestras.

In 2007, Fergus was the Chair of the Local Organising Committee that hosted the 2007 conference in Killarney for the World Association for Symphonic Bands and Ensembles (WASBE) and in 2009 was appointed as a member of the Board of that Organisation, a position he held for a period of six years. He declined an invitation to run for the position of President of WASBE. He holds a Masters in Music (Perf) degree from CIT Cork School of Music.

In 2016, Fergus retired as a professional horn player, Section Leader French Horn, with RTE after 42 years of service, having worked with some of the best conductors and solo artists in the world such as Charles Dutoit, Loren Mazel, Mathias Bamert, Pavoroti, Kiri Te Kanawa, Domingo, Vengarov, Barry Tuckwell, James Galway, Ann-Sophie Mutter, Joshua Bell, Julian Lloyd-Weber to name but a few. Upon his retirement, he immediately took up a position of Head of Woodwind, Brass and Percussion at the Royal Irish Academy of Music, a position he had previously held from 2003 to 2009. He was also appointed as the RIAM representative to the Board of the National Youth Orchestra of Ireland and he has been tasked with the administration of, and conducting of, two concerts to be given by an alumni orchestra in two concerts in Dublin’s NCH and the concert hall of Limerick University. These concerts will form part of the festivities to celebrate the 50th anniversary of the NYOI.

Fergus is sought after as a band clinician for young players and in 2019 appeared as a conductor clinician at the Festival of Bands at the University of Northern Iowa (conducting the state-wide honor band), with St Ambrose University Band (Iowa) and Thomas Hart Middle School (California)