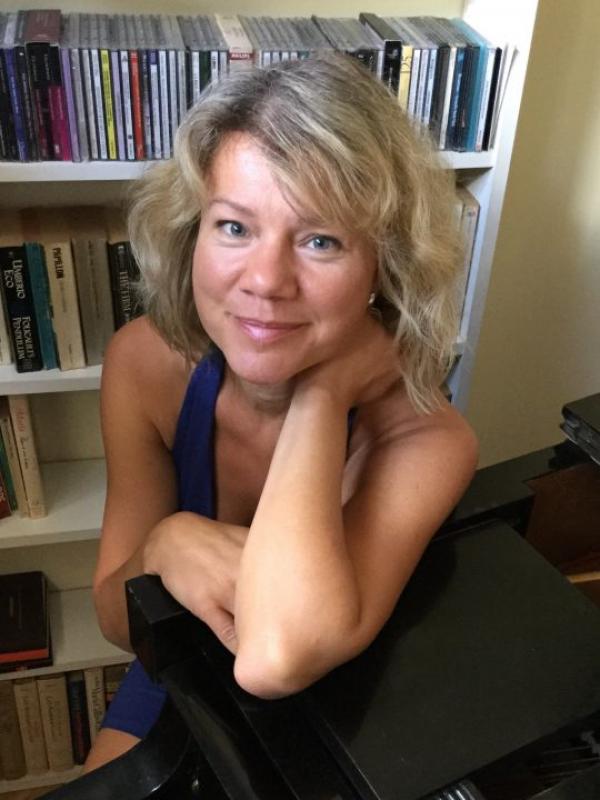 Hungarian Márta Erdei began her studies at the Kodály Conservatory in Kecskemét. Between 1988 and 1994 she studied at the Franz Liszt Academy of Music under the tutelage of Edit Hambalkó and Márta Gulyás. In 1995 she moved to Indiana University, Bloomington, USA, to study with Edmund Battersby, Shigeo Neriki, György Sebök and Leonard Hokanson, receiving “Artist Diploma” in 1997 and “Doctor of Musical Arts in Piano Performance” title in 2003.

Márta enjoys an active performing career as both solo and chamber musician, having given recitals in Hungary, Ireland, Austria, The Netherlands, Italy, Romania, Switzerland, Greece, the United States and Taiwan. She has broadcast for the Hungarian Radio, BBC, NBC, RTÉ and has recorded for the Hungaroton Classic and Divisart Records. A champion of contemporary music in her homeland,she has premièred and recorded compositions by prominent Hungarian composers, among them János Vajda, György Csemiczky and György Orbán. Her newest recordings of György Orbán's 31 newly written polyphonic works under the title Aulos has been released in Hungary in July 2019 and reviewed in the Hungarian music journal, Parlando: "her playing sounds wonderful, full of character, and her tone is exquisite. Her interpretations are always poetic, virtuosic, appealingly playful, and when the spirit of the music calls so, the devotion of her playing transports you to higher spheres."

Due to her authentic interpretation of new Hungarian music, Editio Musica Budapest started a collaboration with Márta in 2019. Her recordings are now sold together with some of their new publications.

As a member of the recently formed ExStasis Trio, she has participated in innovative performances that mix romantic and post romantic music with contemporary and improvised music. Their programmes also incorporate story telling and the use of theatrical elements. She worked with the contemporary music groups Vox 21 and the Crash Ensemble between 2001 and 2007 and has given solo and chamber music performances in the Mostly Modern Series and the RTÉ Living Music Festival.

In 1997 she was appointed Edmund Battersby’s Teaching Assistant at Indiana University. Between 1991 and 2007 she taught chamber music at Capital University, Columbus, Ohio and at the International Kodály Seminar in Kecskemét, Hungary. In 1998 she gave lectures and masterclasses in Taipei and Swinzu, Taiwan.

While at Indiana University, she worked as accompanist for the classes of such distinguished professors as János Starker, Franco Gulli, and James King. Between 1989 and 1994 she accompanied Sarolta Kodály’s voice classes at the Academy of Drama in Budapest and at the International Kodály Seminar in Kecskemét, Hungary.

Márta joined the Teaching Staff of the RIAM as a Lecturer in Piano in 2001. Her students have participated and won prizes at most Irish festivals and competitions such as ESB Feis Ceoil, EPTA Ireland Piano Festival, Newpark Festival, RIAM Pianofest, Piano Academy of Ireland, Arklow, Sligo, Kilcoole Festivals.