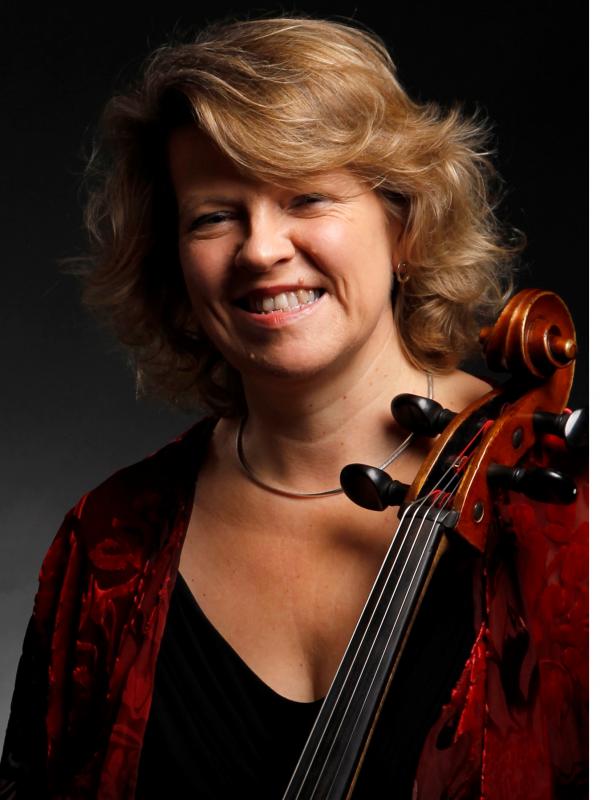 Dublin-born Miriam Roycroft studied at the Royal Northern College of Music in Manchester with Don McCall and Ralph Kirshbaum where she was awarded numerous prizes for cello and chamber music.  Upon graduation she won the Muriel Taylor Cello Competition in London, the Worthing Young Musician Concerto Prize and was a prize-winner in the Royal Overseas League which led to many appearances as a soloist and chamber musician throughout Britain. She was a founder member of the Music Group of Manchester and the Janacek Piano Trio.  Further studies included a period in Banff, Canada, at the renowned Banff Centre for the Arts with Aldo Parisot.

Miriam has performed as soloist with the RTÉNSO many times and has played many of the major concerti for cello with professional and amateur orchestras throughout the UK and Ireland.  She has been a guest leader of the cello sections of the BBC Scottish Symphony Orchestra, The BBC National Orchestra of Wales, the RTÉ National Symphony Orchestra of Ireland, RTÉ Concert Orchestra, Sinfonia ViVa and the Northern Sinfonia.  She has also guest co-lead the cello sections of the London Symphony Orchestra and the BBC Concert Orchestra.  Miriam has been Principal Cello of Camerata Ireland for many years.  With them, she has toured in North and South America, and throughout Europe and China.

Having played with the orchestra of Opera North in Leeds for many years, in September 2006 Miriam joined the String Faculty of the Royal Irish Academy of Music in Dublin.  She was appointed as RIAM Head of the String Faculty in September 2012, a contracted post which she held for three years, and she has bases in both Dublin and the UK.  Her solo, chamber, orchestral and educational commitments take her worldwide.

Miriam has performed as soloist at the Manchester Mid-Day Concert Series, the Kilkenny Arts Festival, Castletownshend Music Festival, at the National Concert Hall and the National Gallery of Art in Dublin as soloist with renowned Irish pianist, John O’Conor, and at the ‘Great Music in Irish Houses Festival’ with the American cellist, Steven Doane.  In March 2010, she performed at the National Gallery of Ireland as part of the ‘Chopin 200’ bi-centenary celebration concert series.  Film work has included ‘In America’, (as featured artist) and ‘the Blue Tower’.  Recent performances have included recitals at Festivals and Concert Halls in Dublin’s Hugh Lane Gallery, the Studio, Kevin Barry Room and the John Field Room at the NCH, Wexford,  Valentia Island Chamber Music Festival, York Minster, The University of Limerick, Derry, Belfast, Castalia Hall, Kilkenny, the Curtis Auditorium at CIT, Cork and in Leeds.  In 2013 Miriam performed a series of recitals with Réamonn Keary featuring the cello sonatas by Benjamin Britten and Charles Alkan throughout Ireland.  They were featured artists at the ‘Yorkshire Live Music Project’ Northern Lights Series in Wakefield in May 2012 where they gave the World Premiere of ‘Four Commentaries’ by Nigel Morgan.  Between 2017 and 2019, Miriam performed the complete works for cello and piano by Martinů with Lance Coburn at Dublin’s Hugh Lane Gallery and they also took part in the ‘Female Composers Series’ at the NCH and for Lyric FM in April 2019.

Miriam has performed and given masterclasses in the USA, Poland, China, Spain, Finland, the UK -for the London Cello Society and the Oxford Cello School- and Ireland.  In July 2016, Miriam founded ‘Leeds Cello Masterclasses’.

Miriam plays on a modern American cello by Grubaugh and Seifert which she commissioned in 2004 and a bow by Irish bowmaker, Robert Pierce.