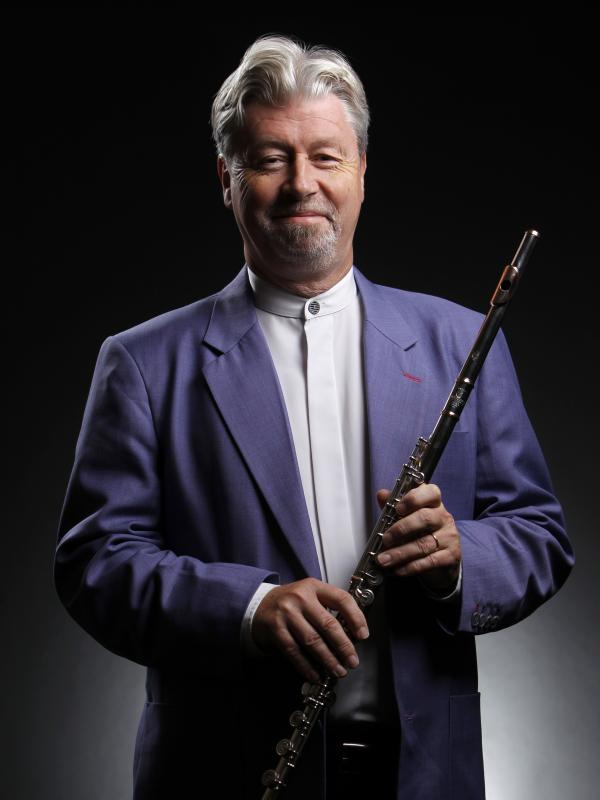 Dublin born William Dowdall, one of Ireland’s leading musicians, combines a busy career as a soloist, chamber musician, and teacher.

He trained in Cleveland, Ohio, where his teachers included Maurice Sharp of the Cleveland Orchestra, and his interest in new music was sparked by Donald Erb, composer in residence at the Cleveland Institute of Music. On returning to Ireland at the age of 21 he was appointed principal flute of the RTÉ Concert Orchestra. From 1979 to 2004 he was principal flute of the RTÉ National Symphony Orchestra. He was appointed professor of flute at the Royal Irish Academy of Music in 2004.

He has given over 50 solo performances with the RTÉ National Symphony Orchestra, RTÉ Concert Orchestra, and Irish Chamber Orchestra, and has appeared at all the major festivals in Ireland.

He has been a member of the Daedalus Wind Quintet, Ulysses Ensemble, and the Ulysses Wind Quintet which was a prize-winner in the Colmar International Chamber Music Competition in 1980. As a chamber musician he has also guested with the RTÉ Vanbrugh and Parisii string quartets.

Solo performances abroad have taken him around Europe, and to the USA, China, and New Zealand, and Australia. His work has been broadcast extensively by the Irish public service broadcaster, RTÉ, and he has also broadcast on BBC radio and television, Australian Television, and Shanghai Radio.

In addition to a wide ranging repertoire, his interest in contemporary music led him to develop a workshop based on contemporary solo flute music by Irish composers, which has been presented in Europe, United States, New Zealand, and Australia to considerable acclaim. He has introduced Irish audiences to new works from the international repertoire, and has actively promoted the music of Irish composers abroad. Many Irish composers have written works for him and he premiered a new work by John Buckley for flute and orchestra with the RTÉ NSO and toured with it around Ireland in 2006 and performed it again with the NSO in January 2009.

In the last two years alone he has given 8 world premieres of works by Irish composers and has espoused the flute music of composers such as Bernstein, Boulez, Takemitsu, Henze, Varèse, and Maxwell Davies in Ireland. He recently gave the Irish premiere of Takemitsu’s “I Can Hear the Water Dreaming” with the RTÉ NSO.

As a solo artist he has made critically-acclaimed recordings for Goasco, Naxos, Marco Polo, Black Box, and Celestial Harmonies labels and is currently involved in a project with Atoll Records to record Irish and New Zealand works for solo flute and flute and electronics.

He plays on a platinum flute by Brannen, a wooden flute by Abell, a Louis Lot dated 1891 and an alto flute by Eva Kingma.